Last week due to stress & workloads, I decided to spend my money on doing something good and satisfactory to myself but somehow dont know what to do. Kalo ikut kan hati rasa nak fly pergi London right away & have dinner or coffee somewhere London' street,heheheh tapi I wish ajelah kan. So, I ternampak one restaurant kat KLCC yg ade ambience macam kat London lah kot, so I decided to land at Harrods Cafe kat KLCC jer,hehehe. At least boleh feeling2 ajelah kan, hehehe

It was 9.20pm ad its almost closed, but its ok lah since I wanted to feel it so much kan, hehehe. Actually, the restaurant sama je dengan tempat lain pun, its just the food and ambiance that makes you feel that we are being there kot, heheh, or its just me yang berangan,hehehe. You can find Harrods' boutique at level 1 but this newly opened cafe located at level G, same floor as Ralph Lauren Boutique. 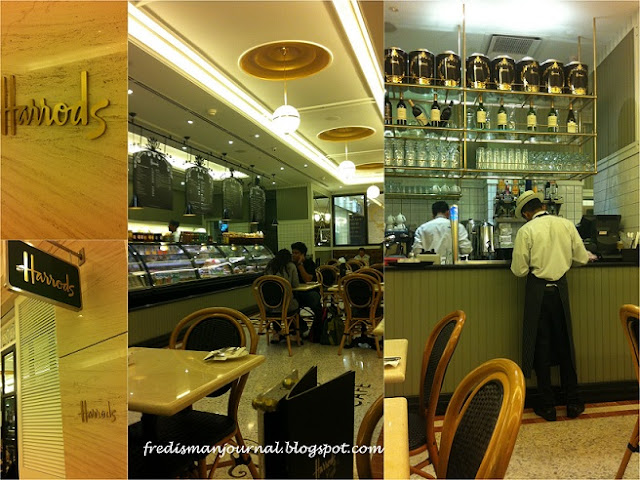 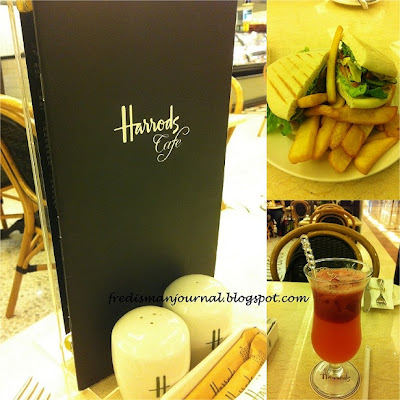 I had ordered Green Chicken Sandwish and Watermelon Juice, tapi bila sampai banyak pulak portion nye sampai tak habis, hehehe. Food was nice with affordable price I must say tapi kalo hari2 tak lah kan, hehehe. The waiters were friendly and helpful, so far I felt satisfied with the service and food, heheh.So, for those who wish to try this place, you would probably love the food and service, it pays off your dollar spent, heheh.

So, i wish you great week ahead and a pleasant day people. Remember to eat healthy, live healthy ya, until i write again. Adios